Now, there’s a new way to keep up to date on all things NEOTOLEDO: check out the weekly podcast.

The NEOTOLEDO bandmates are supplementing their rehearsal time with a half-hour podcast recording session. They’ll be discussing plans for the band, as well as topics like robot overlords, space missions, science fiction films, subjugation of the human race by evil artificial intelligences, and more.

Have a topic you’d like to hear the NEOTOLEDO boys discuss? Email us at neotoledorecords@gmail.com!

There’s been a surge of NEOTOLEDO activity of late.

In late summer/early autumn of 2014, the four members of NEOTOLEDO’s best-known lineup rehearsed and performed together for the first time in years.

A couple of low-key jam sessions gave the boys the confidence to appear at an open mic night at Cafe Panini in Carlsbad. They played several NEOTOLEDO classics (Mission to the Unknown, Kopernicus, Holding My Bionic Hand, Pushed into Space) which were well-received by the hipster-surfer-coffeeshop crowd.

Plans were made for a full-fledged NEOTOLEDO reunion show at Cafe Panini. The group began as series of secret rehearsals, with a new mission: to recast the music in a stripped-down, semi-acoustic manner, much like the boys’ favorite rock bands did in the 90s with their “unplugged” specials.

The resulting show was a success, leading the boys to launch the next stage of the NEOTOLEDO musical journey. Ties to the past were cut: future endeavors would focus on developing all-new material. NEOTOLEDO frontman/principal songwriter Khryztof began a flurry of writing and demo recording, and was joined at various times by bassist Smalls, drummer Chuck, and keys man Stecki to shape the raw material into finely honed rock epics.

NEOTOLEDO fans will find that the boys’ obsession with robots and outer space remains undiminished, as does their penchant for loud guitar, throbbing bass, pounding drums, and screaming synths. Yet the neo-NEOTOLEDO music goes deeper, lyrically and sonically.

As the band continues to rehearse, they’re discussing plans to record and perform the new songs in 2015. They’ve also begun recording podcasts to keep their fans up to date, and to provide another channel for sharing their views on the universe at large. Watch this space for further transmissions.

Q. When did you first become aware of NEOTOLEDO?

A. In about the summer of 2007. “We met on Craigslist,” as Khryztof likes to say (laughs). They were looking for a drummer to replace Bernadette, who’d kind of vanished off the face of the earth – of course I think evil robots were responsible. At the time I was in another band and couldn’t go full-time with NEOTOLEDO, so they went with Bobby. A year later, they posted on Craigslist again for a drummer, and this time it worked out. That’s why I always say, “Kids, don’t give up on your dreams (laughs)!” A. Well, it was life-changing for me (laughs)! I think the first song we played was “View from the Moon.” A fast, punk-y song with lyrics about space and “Big Brother’s nuclear fist” … I was hooked. The guys were all really chill, and we all shared the Midwest roots thing. At the end, they gave me a demo CD and a NEOTOLEDO t-shirt and said, “We’ve got a gig in Ocean Beach in two weeks.” And off we went!

Q. What else about the music appealed to you?

A. Khryztof had sent me a few tracks and some YouTube videos; when I heard “Pushed into Space” I thought, “Oh, I need to be a part of this.” Once I’d played a few shows, I really understood what we were doing and why it was unique. The songs were robot- and science fiction-themed, of course, but the messages they conveyed were very human – isolation, alienation, the highs and lows of romantic love. So maybe you thought you were just getting a fun pop song with “Holding My Bionic Hand,” but on a closer listen, there was a lot more depth there than you’d find in other contemporary music.

A. Well, Smalls met a great girl and became a “family man” overnight (laughs). But Khryztof, Stecki, and I knew we wanted to keep going. Khryz’s new songs were really stripped down, lyrically and musically; he let go of the SF imagery and just laid out what he was feeling in an unadorned fashion. “I Need Money” is a great example. So it felt natural to drop the ukulele and synthesizer – Stecki switched to bass and to compensate for the loss of Smalls, we just played louder (laughs). And of course, Smalls knows he’s welcome to come play anytime. Q. The last and biggest question: what’s next?

A. I think the most important thing to consider is we started out as guys who played music together and were friendly; now we’re friends who play music together, and that mindset is what will guide us going forward. We have lots of ideas about quieter instrumentation; we’ve talked about using just uke, piano, and hand percussion. But we’re always gonna be guys who like to make lots of noise in a garage (laughs). And the threats of robot uprisings and nanobot control that inspired the formation of NEOTOLEDO are still very real. Yeah, we’re a bunch of fun guys, but we take those threats very seriously, and the best way for us to keep them at bay is to keep bringing our music to the people.

After producing the Vadun.Holtwick.Stecki album Circus for the NEOTOLEDO Records label, the group took a break to pursue other endeavors. To hear and purchase the V.H.S album, go to the band’s Bandcamp page. 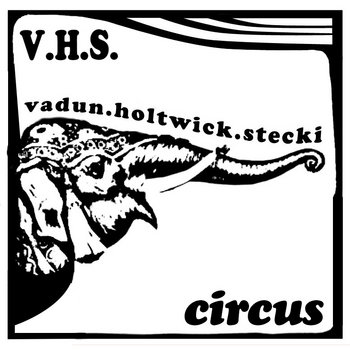